As well as the extremely critical situation at the borders of Bosnia-Herzegowina (borderviolence.eu), there is a rising number of reports about police violence in Sarajevo.

In Sarajevo, people are regularly getting beaten up by the police, either by the City Police in blue uniform or the Military Police who wear black uniforms.

These incidents often happen to people whilst they try to make some money by selling packets of tissues on the streets. This is a very common activity for those staying in the camps or Kharabs (empty houses or ruins), as they do not have access to regular work. People staying in Ušivak Camp take public transport to the City Centre everyday, which takes 90 minutes. At nearly every traffic light there is at least one person selling tissues, making it more common than begging in Sarajevo.

One documented case of police violence happened on the 25th of February, to a person working at a traffic light. 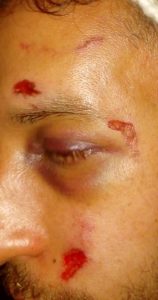 Zaccharia was trying to make some money in the City Centre, when a police car stopped and five Officers in blue uniforms got out and started beating him up without any warning. They beat him to the ground using their fists and kicked him multiple times. He suffered several injuries, including open wounds on his face and two black eyes, as seen in the picture. Zaccharia lives with nine people in a small Kharab in Ilidža, a suburb of Sarajevo. Like many people in the streets he has no access to medical infrastructure. That night he went to sleep with open wounds, facing the danger of infections.

This violence is connected to an increase in racist policies and statements made by the government against people in transit (see previous post, press release Ministry of Security). Also rising hostility can be observed through the increase in reports of police violence, as well as racist tendencies in society. These are often communicated verbally but can also materialise in physical outbreaks. In contrast, many people still tolerate people in transit, by at least not calling the police on them for squatting. There are also some local support structures. In addition, there are reports of individuals helping out with money and food, taking into account that Bosnia-Herzegowina is a lower income country in comparison to most of Europe.

Activists fear, that due to the change of the Minister of Security and his anti-migration politics the violence lately witnessed will get worse.

This is a translated summary of a press release by the Ministry of Security on the 24th of February.

„Bosnia-Herzegowinas Minister of Security Fahrudin Radončić met on 24th of February with representatives of the Una-Sana Canton and the city of Bihać, to consult with them on a solution for the problems of the migration crisis (sic).

In regards of a new migratory wave (sic) the ministry of security will this year initiate stricter laws as well as providing additional staff for the border police and the service for foreigners.

Radončić announced his intention to close the camps „Bira“ and „Sedra“ in Bihać und Cazin: „For the people of Una-Sana Canton and for me as minister its a legitimate right to set priorities. The first priority is Bosnia-Herzegowina, the second priority is the security and safety and the well-being of Bosnia-Herzegowinas citizens and just on third place there is the security and the concern for the migrants. We must not allow us to bury Bosnia-Herzegowina by transforming it into the biggest parking lot for migrants. For migrants, who do not want to be in this country, but go to other european countries. We have no right to destroy the life and the tourism of this canton, as well as the freedom of movement of our people.“

He encourages the political leaders of the Canton to a more rigid approach towards the refugees who, according to him, committed over 1000 offenses. The politicians are supposed to give information about their acceptance capacity. Radončić pursues a national solution.

The Cantons Premier Mustafa Ružnić showed satisfaction about the outcome of the meeting.“

To contextualise there is a statement by No Name Kitchen about the Situation in Velika Kladuša:

These past two weeks, police pressure has increased against local and foreign volunteers working for organizations providing assistance to people in transit in the border city of Velika Kladusa. This small site located at northeastern Bosnia witnessed the massive deployment of vans and mobile units of special forces, border police and of police from other locations of the Una-Sana Canton. The neighbors noticed the presence of agents in civilian clothes and uniformed in the streets, the main square, cafes and areas such as the bus station and around the Miral refugee camp.

It all began after a protest called by different sectors of migrant people to denounce the violence that they are experiencing by Croatian police when they try to cross to the European Union through the natural borders between both countries. The mobilization, which was to take place on February 15, should have started at the gates of Miral, a refugee camp run by the International Organization for Migration (IOM), and then head to the migration checkpoint in Croatia.

The call for the demonstration triggered the alarm at a regional level and brought back the ghosts of 2018 when a similar demonstration ended with the closure of the border pass and it made clear the differences that some locals had with migrants. There was repression, protesters camped and five days of tension. This time, the arrival of security forces triggered a sort of „curfew“ that left pictures of deserted corners, markets with no customers and stray dogs lying in the middle of the roads. A local shopkeeper in the city center said: „We had never seen so many police at the same time here before, they are everywhere. It’s the first time I’ve seen anything like this“.

Foreigners and locals working in organizations providing assistance to migrants on the ground reported having been followed and interrogated in the streets and in their workspaces. They warned that inspections had been carried out in their homes, they had taken photographs of the people, their documents and belongings, and had even checked their personal computers without prior consent. This pressure on the work teams reduced the pace of their tasks and activities and had a negative impact in the hundreds of men and women who receive food, clothing, medical assistance and different types of care every day. The same police modus operandi took place in the squats, refuges, homes and abandoned buildings where a high percentage of people in transit live. In these cases, the officers insisted on the people that they should not participate in the protest.

On the day of the march, Velika Kladusa woke up deserted. There was no mobilization. A few hundred demonstrators cordoned off by Bosnian police marched inside Miral camp: thousands of refugees from Pakistan, Syria, Morocco, Afganistan, Iraq, and Algeria live there, in a space with capacity for 700 people. Their demands focused on the cessation of the beatings and robberies carried out by the Croatian border police when they are apprehended and pushed back to Bosnia. A young man, who preferred to keep his identity, said „They treat us like animals. They beat us with sticks, they steal our money, they ask for our phones and if they like it or if it is an iPhone, they ask you to unblock it or if not, they destroy it. They burn our clothes, our food, and they force us to come back in socks and t-shirts in winter“.

Despite the call, during the ten days following the march, new cases of violence and push backs from Croatia were reported. Two people were forced to cross the Glina river during their push-back and came back to the city in soaked clothes and with no coats on. Another person arrived to the hospital at the Miral camp with a deep wound in his head. Moreover, groups of nine and six members including Moroccans and Algerians, said they had been chased by green uniformed officials in ski masks, who fired arms. Once they were arrested, they were beaten with batons and forced to give their money and phones. Their rucksacks, jackets, shoes, tents, and food were all burned.

Text and photo by Nel

Until yesterday, Ismail stayed with three friends in a squat in Ilidza, Sarajevo. Squats here are often called Kharab a term that basically means a ruin or a messed up place. They lived in the place for about a month and describe their relationship to the neighbors as friendly. Also, that they helped them out in different ways. This is an experience many people staying in Kharabs shared with us. For a squat in Sarajevo the house was in a good condition and as seen on a Video the room was – for a squat – quite homey. Yesterday, the room they lived in burnt out completely. All their belongings, including mattresses, blankets, clothes, two phones and money, were destroyed. 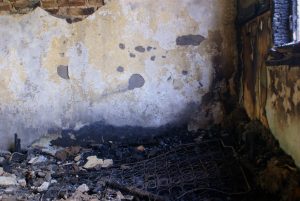 They had trouble with a group of people from Serbia who they identified as racists. Although they didn’t have physical conflict with them, Ismail is certain that they set their room on fire on purpose, while he and his friends went out during the daytime. They did not have candles, cooking facilities or electricity in the house.

They said this has happened to groups in other squats as well.

A lot of people who stay in Sarajevo are now trying to get a rest coming from Montenegro, or after a push-back and to collect money to go back on “The Game” as soon as possible, trying to cross the border to Croatia by foot. This more than often ends in violent push-backs by the Croatian Police and Military, which is straining enough.

After one night on the streets, Ismail and his friends are going back on Game tonight.

What is a Pushback?

By definition, a pushback is

This is what happens every day to refugees who are trying to cross Croatia. In the EU-Law it is written, that every individual – no matter if they entered the country illegally or not – has the right to apply for asylum and that his/her individual case is checked2.. However, in reality refugees are being illegally deported from Croatia back to Bosnia, often also experiencing police violence.